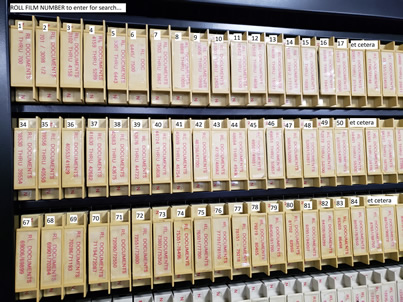 For example, if you are looking for document number 102266: Look in the “From First Document” columns until you get to the document number closest to 102266 but not greater than 102266. You should find that 101801 in the “From First Document” column is closest to 102266 without going over it. You will notice the “Film Roll Number” column shows 99 is the number you should enter in the “RL Docs Before 1988 Film Roll” field on the search page. (The “To Last Document” column has 102850 as the last document on the roll of film. Since the document number for which you are looking is between 101801 and 102850, it confirms Film Roll #99 is where you will find your document). In the “RL Docs Before 1988 Film Image Number field, enter 1. When the document image viewer appears use the “Next Page” button to scroll through the film to find your document. Otherwise, you can guess a higher File Image Number to enter that may be a closer starting point to finding your document of interest.

If this online search method is not beneficial to you, please visit our office in person to view the films in the traditional manner.